We are in the Hebrew month of Elul, approaching the Days of Awe, and there is a concept  I think it’s important to think about while teshuvah has become a central focus of Jewish life. During Elul one of the dominant themes is that the King is in the field. The Bal Shem Tov teaches the sound of the shofar is the sound of the prince crying out for his father the King. On Rosh Hashana we crown Hashem as King of all creation. These metaphors  allow us to talk about the process of teshuvah. The process of turning away from evil and choosing good. Of choosing life. Of returning to our true selves. Of returning to God.  But there is a metaphor here (and it’s good to say any time that we are talking about God we are talking in metaphor because God is beyond any concept) that is not used as often which is that of God* as lover.

That God is our beloved and we desire to be with God. It’s not such a radical concept. The idea of ‘dvekut’, of cleaving to God, of unifying with God, is very aptly described by the union of lover and beloved. Torah teaches that the letters of the Hebrew month  of Elul-  אֱלוּל-  stand for –  “אני לדודי ודודי לי” – which means,” I am my beloved’s and my beloved is mine”. There is also Yedid Nefesh, the Song of Songs (which is the source of the above line about Elul), so this is definitely a Jewish concept. Ecstatic union with God, rushing headlong into God, losing yourself in God, the bliss of being with God, all of these metaphors also describe teshuvah.

It’s true that there is the teshuva of character refinement, of self examination, of inner work, of resolving to become our best selves and to chart a course of action in the direction of that goal. But for many including myself, there  needs to be a reason why, a reason why I should bother with life, let alone self improvement. At a certain point I realized that happiness could not be bought in a store, or found in the world of form, and it seemed as if all around me was suffering and inside of me was a hole that could not be filled. It was only when I experienced myself in union with the Divine, that suddenly my relationship to my particular life, took on a new vibrancy, in which everything I saw around me, including myself, was created by God, was of God, that I was a manifestation of the mystery of spirit-in-action.

All of the things we get lost in, that we need to improve on, the petty arguments, the worrying about this and that, the greed, the craving, the resentment, the holding on to darkness, the addictions, the small mindedness,  all of these are the impediments which we need to do teshuva on, because they  are holding us back from being with our Lover, and the soul is in distress from this lack of union, the teshuva of returning to God.

Ok, a quick hasidic story to add to what I am saying. I heard this at the Mayanot yeshiva in 2008. Someone once came to the first rebbe of Lubavitch, the spiritual luminary Rabbi Shnuer Zalman of Liadi, with a problem that the rebbe had never encountered before. Often when a rebbe helps someone he has to see things, to see life, from the perspective of the person who is asking for help, but in this case the Bal ha Tanya (another name for Rabbi Shnuer Zalman of Liadi) found it difficult, because the problem this person had was necrophilia. It was not immediately apparent to Rabbi Liadi how he could put himself in this person’s shoes. If I remember correctly, he sent the person away and told them to come back in three days (or something along those lines). When the person came back Rabbi Liadi was able to help him. 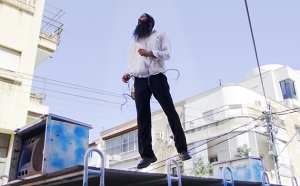 When the Bal ha Tanya’s students asked him what allowed him to help the man, he told them at first he couldn’t possibly relate to what the man was telling him on a personal level, but then he thought of a comparison that allowed the rebbe to put himself in the man’s shoes. What was it? The answer was davening without kavannah; that to pray to God without kavannah, without love, with sincerity, without intention, was like embracing a dead body. What does this mean? It means that Jewish prayer is supposed to be a form ecstatic union with the Divine! That living a Jewish life is not supposed to be the empty and boring drudgery of going through the motions. It’s supposed to be alive! Because God is real! Because the soul is real! Because the yearning to return to the Source is real.

So teshuvah, returning to God, is getting rid of all of those egotistical hang ups, all of our narcissism, that is not allowing us to see past ourselves. All of our selfish desires, for what we truly desire,  which is God. The reason that hole in our soul cannot be filled by anything of this world is because it can only be filled with the Infinite. And God is recreating the world every single second. The Infinite is giving birth to finiteness. Something out of nothing. As a lover, all we want to do is be of service to our Beloved’s creation, which is to be of service to life, to do God’s will. To relate to God’s creation, but not from a selfish perspective, rather from the perspective of a giver. Because what else is there when you are utterly in love with God. So turning away from evil and choosing good is turning away from anything that disconnects us from being with our Lover and choosing God.

May God bless us that our teshuvah process be one of casting off the heavy garments of sin. May we find ourselves like Adam and Eve, innocent, pure, and in the Garden with our Beloved.

*A quick note, the usage of the term God here, could also be Goddess, God is beyond any gender, beyond any concept, what I am talking about is a mystery to the intellect, but intimate to the soul.